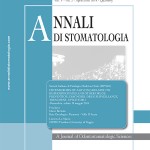 Bisphosphonate-related osteonecrosis of the mandible after implant surgery

According to current literature, a history of use of bisphosphonates is not an ab-
solute contraindication for dental implant placement. BRONJ associated with dental
implants is a rare complication and the few reports in literature have reached conflicting conclusions. Furthermore recent studies have indicated that the relative incidence of BRONJ in patients receiving bisphosphonates orally for osteoporosis treatment is higher than previously thought.
We report a case of a 70-year-old patient presented to our observation in April 2011 with an area of infected and ex- posed necrotic bone in the anterior mandible with two mobile dental implants. The patient underwent rehabilitation of the anterior mandible with two dental implants in December 2010 while taking Fosamax® (alendronate sodium, orally 70 mg a week from 2005) for the treatment of osteoporosis. A panoramic radiograph and CT scan showed an increased bone marrow density with large peri-implants bone sequestration (en block sequestration of bone with implant). 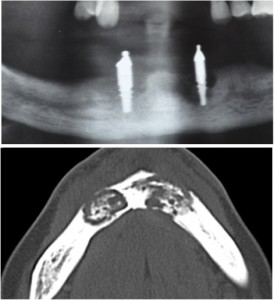 A diagnosis of BRONJ stage II was made based on the criteria of the American Association of Oral and Maxillofacial Surgery. The patient was treated surgically following an intraoral approach. Sequestrectomy with removal of necrotic bone, removal of implants, osteoplasty and primary closure were performed. Orally antibiotic therapy followed for two weeks. At a 6-month follow-up control, there was no evidence of disease with a normal mandibular mucosa.
It has been stated that BRONJ associated with dental implants usually is a late complication unrelated to surgery and that generally affects the posterior sectors of the mandible. However, this case report highlights how the BRONJ associated with dental implants can be a devastating side effect of treatment with oral BPs, triggered by implant surgery. In our opinion, great care must be taken in the selection of patients and further studies are required to identify risk groups.