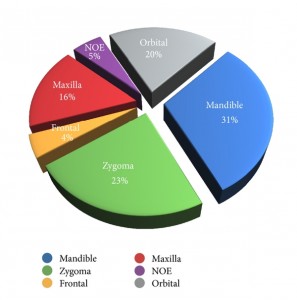 The aim of the present study was to assess the etiology and pattern of maxillofacial fractures in the Province of Pescara, Abruzzo, Central Italy. Was performed a retrospective review of patients treated at the Department of Maxillofacial Surgery of Spirito Santo Hospital from January 2010 to December 2012. Data collected and analyzed included sex, age, cause of injury, site of fracture, monthly distribution, and alcohol misuse. A total of 306 patients sustaining 401 maxillofacial fractures were treated. There were 173 males (56.5%) and 133 females (43.5%). Most of the patients (36.9%) were in the age group of 18–44 years. The most common causes of injuries were road traffic accidents (26.4%); the second leading cause was interpersonal violence (23.2%), followed by injuries associated with falls (19.2%). Fractures of the mandible (31%) and zygoma (23%) were the most common maxillofacial fractures in our study. The monthly distribution peaked in the summer (July and August, 30.4%) and in October (13.1%). In conclusion, this study confirms the close correlation between the incidence and etiology of facial fractures and the geographical, cultural, and socioeconomic features of a population. The data obtained provide important information for the design of future plans for injury prevention and for education of citizens.